Learn You Some Erlang for Great Good! (No Starch Press) 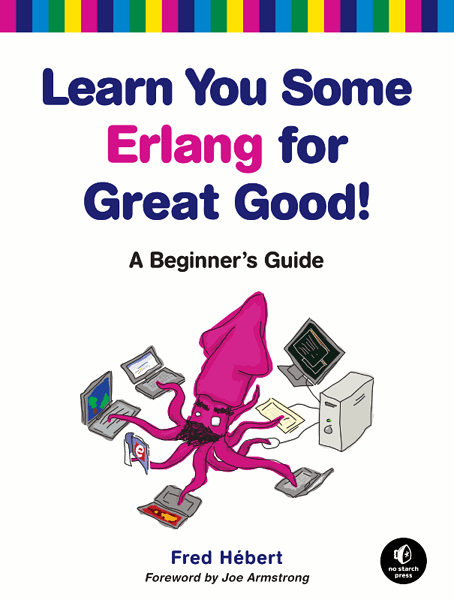 Erlang is the language of choice for programmers who want to write robust, concurrent applications, but its strange syntax and functional design can intimidate the uninitiated. Luckily, there’s a new weapon in the battle against Erlang-phobia: Learn You Some Erlang for Great Good!

Erlang maestro Fred Hébert starts slow and eases you into the basics: You’ll learn about Erlang’s unorthodox syntax, its data structures, its type system (or lack thereof!), and basic functional programming techniques. Once you’ve wrapped your head around the simple stuff, you’ll tackle the real meat-and-potatoes of the language: concurrency, distributed computing, hot code loading, and all the other dark magic that makes Erlang such a hot topic among today’s savvy developers.

As you dive into Erlang’s functional fantasy world, you’ll learn about:

Full details here: Learn You Some Erlang for Great Good! | No Starch Press

Or read for free online: http://learnyousomeerlang.com

It is truly a great book!

It really is an awesome book, didn’t even know it had a physical version (pretty sure it didn’t last I checked it, lol), that’s awesome!