What would you like to see in Erlang or the BEAM world?

Further to the thread about static typing - what would you personally like to see most in Erlang or the BEAM world?

Please note if any interesting discussions/forks result from this thread we may split them into dedicated threads.

In the spirit of keeping this general and to avoid bike shedding (if you will) I’m going to keep my reply as short as possible and limited to Erlang/OTP for the moment. As a lot of what I could say has been covered in other threads or will be covered by others. Some of this is redundant, but I like over-communication

These are in order of priority :

There’s way more I could say, but then it goes into specifics, so I shall refrain for now

Of course, I would be remiss to not comment we can wish all day long for X and Y, but it’s going to take action to make these things happen, as is tradition. That’s a whole thread unto itself.

A united front. There has been great progress in this area over the past few years, but we’re not quite there yet. I still very much feel that there’s little factions that refuse to embrace such a notion and I think this exists on all sides. One hand washes the other, full stop, period. And I will say it yet again : What’s good for the goose is good for the gander.

the sooner the better

A slimmed down and more ergonomic standard lib

Hmm… Personally I want more! More! Or rather, I want more stuff in the most commonly used modules, not more modules. Stuff that falls on the “maybe useful sometimes” scale. Like the following, “missing” from the lists module:

Even though I don’t use all of them that often, and even though some of them may just be special cases of already existing lists functions, it still feels wrong rewriting the chunk function for the dozenth time. I can appreciate that many might prefer a slim API, but I like to have everything useful just there for whenever I need it, and I can trust it’s been properly and efficiently written and tested already.

Beyond JIT there’s surely places to optimize ERTS and Erlang code all over the place.

I have to protest against the phrase “all over the place”. To me that sounds like a code base where most of the attention has been spent on implementing new features and making them work, and very little attention on efficiency. I am sure that’s not what you meant.

I would say that there has always been the ambition to make Erlang faster.

That said, we in the OTP team also find efficiency important and will continue to do optimizations. For example, in OTP 25 the compiler will store type information in the BEAM file. The JIT can then generate slightly better code using the type information (for example, remove redundant type tests). While the mechanism for transferring type information to the JIT is introduced in OTP 25, we expect to take more advantage of it in OTP 26. (It is not that much time left for major optimizations in OTP 25, because we want all them to go in to the first release candidate of OTP 25 (released during the first quarter of 2022) to ensure that they get tested by as many people as possible.)

In contrast to what @Bryan Paxton and many others state, I am very happy with what Erlang/OTP is today. For me, the unique selling points are:

So what can be improved?

Have a nice day!

Can the official publish a book like this: https://github.com/happi/theBeamBook。
Very helpful for deep learning！！！

More than “more of more”, my personal peeve with OTP libraries is that it denies me the ability to use pattern-matched selective ‘receive’, just like raw Erlang code was supposed to. The handle_{ call | cast | info } event callback functions are so-o-o 1990’s! MS-Access BASIC anyone?! Ugh!

I do have a prototype behaviour that restores selective receive to my OTP-supervised code, and I enjoy creating state machines with it. Maybe someone here might be interested to kick the tyres, and tell me how to improve it?

People have tried but it is a hazzle. I know Klarna tried for some time but ended up implementing new backend for mnesia like elevldb.

But I would like to see some love to mnesia. I think it is really great that it is included and it works very well.

I have to protest against the phrase “all over the place”. To me that sounds like a code base where most of the attention has been spent on implementing new features and making them work, and very little attention on efficiency. I am sure that’s not what you meant.

Definitely not what I meant, there’s never been what I’ve seen, experienced, nor what history shows. Rather, I merely took an optimistic view that more optimizations surely must be possible.

There’s no good way to use OS provided cacerts, and most of the clients are insecure by default and require a lot of knowledge to secure. Hackney is an exception but it’s HTTP1 only, I’d love the same for HTTP2 and websockets.

It has been really cool to see Elixir making big improvements in this area (and in terms of their performance), but I am a bit sad that these libraries can’t easily be used from Erlang, Gleam, etc.
If I had the time I’d like to port one over to Erlang or Gleam so we can all use it.

Before reading my wish, understand that I really know how far fetched this is based on how the scheduler works, but I have spent 3 years refining what I need for a project and this is my magic wand want.

I would actually want the ability to run some scripting language as part of a process. Imagine I can spawn a process that has some micropython interpreter that will allow me to run small scripts that users can create themselves. The project I’m busy with requires thousands of ant-like erlang programs to communicate and collaborate and erlang is PERFECT for this massively concurrent message based co-operative stuff but to make it accessible for users that want to experiment with small plugins that make each individual ant uniquely intelligent, they need to add this intelligence as C, python, or LUA.

I have a good understanding of how BEAM works and why this isn’t possible considering the scheduler and other stuff. But I refuse to use any other language for the foundation of this program, there is just nothing like it out there.

I know I can run a lua/python/JS interpreter and allow each ant to pipe a small bit of code it wants the result of, but if one person writes bad code it will crash/block all other ant plugins. I want an ant to die, or restart its interpreter if the plugin is bad, not bring down the whole nest.

Have you seen Luerl? It sounds like it may be what you’re after. 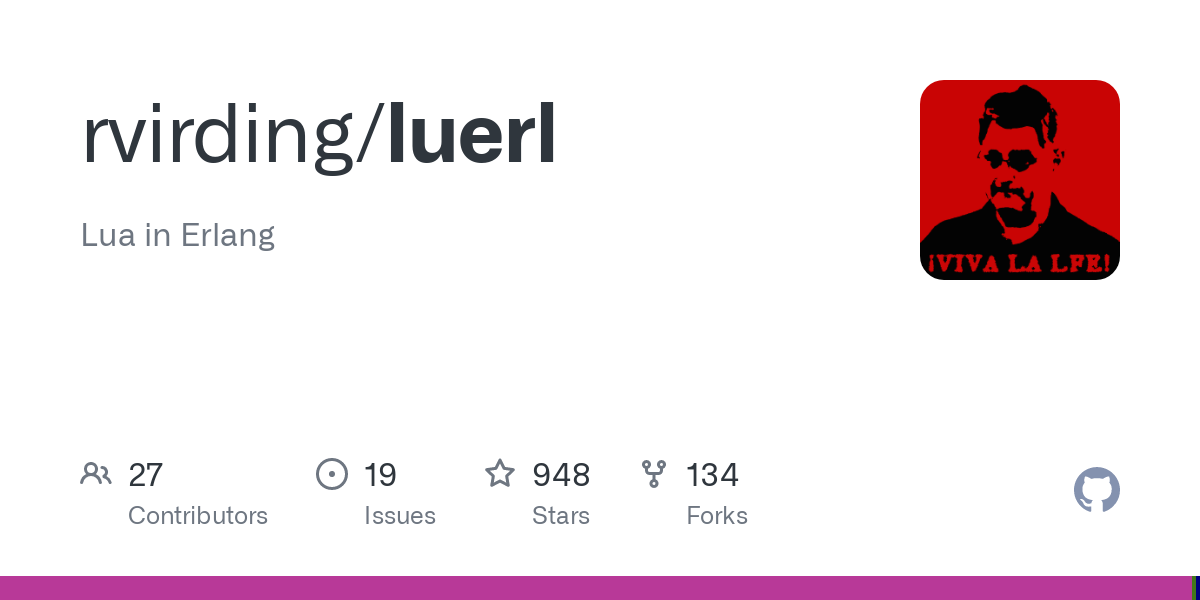 Lua in Erlang. Contribute to rvirding/luerl development by creating an account on GitHub.

Yes, currently I have to run a NodeJS server to use the stuff I want like socket.io then TCP it to erlang.

I actually looked at it! I know I had some good idea of why I didn’t start adopting it but I will have to go back to my notes to give you a good answer. I am considering putting one of my interns on this to write some tests on the efficiency/usability.